Restaurant Honored with Wine Spectator's "Best of Award of Excellence”

We hate to brag, but we think our talented team at Michael's Wine Cellar may have had a hand in a major achievement at our adjacent Restaurant, Michael's On East. Here's the full announcement as Michael's On East receives its first-ever "Best of Award of Excellence" from Wine Spectator!

Michael’s On East Earns its First-Ever Wine Spectator “Best of Award of Excellence” Restaurant Award in 2017. 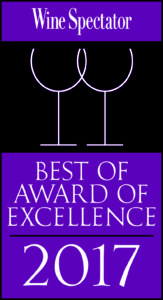 After 25 Consecutive Years in “Award of Excellence” Category, the Restaurant is Honored with an Upgrade in Award Level during 30th Anniversary Year Michael’s On East Among 3,592 Winners Worldwide; Full 2017 Dining Guide Revealed in Wine Spectator’s August Issue [Sarasota, Fla.] (July 27, 2017)

Michael’s On East has been honored for its outstanding wine program in Wine Spectator’s 2017 Restaurant Awards. The Restaurant is recognized among other winners from all over the globe as a top destination for wine lovers. After 25 consecutive years being recognized with the “Award of Excellence,” Michael’s On East won its first-ever “Best of Award of Excellence” honor this year.

“Our unique wine program is a true prize of the Michael’s operation, boasting 12,700 bottles on property. It’s certainly an outstanding time to be honored with this upgraded award as we marked our Restaurant’s 30th anniversary this past spring,” said Michael Klauber, Co-Proprietor of Michael’s On East.Klauber’s personal experience with the Wine Spectator restaurant award program dates back decades as he accepted the “Grand Award” in 1982 for the wine program he created on Longboat Key at The Colony. “Every detail at Michael’s On East is designed with our discerning guests in mind as they enjoy inventive cuisine with fine wines–often from winemakers we have enjoyed personal relationships with for many years! Our guests also have the unique benefit of purchasing wines they discover on the Restaurant’s wine list from our adjacent retail store, Michael’s Wine Cellar. We take tremendous pride in providing remarkable wine experiences for true wine lovers, and couldn’t be more excited to receive the ‘Best of Award of Excellence’ distinction this year,” Klauber added.“Restaurants continue to raise their game when it comes to wine, and we are particularly proud to present this year’s winners,” said Marvin R. Shanken, Editor & Publisher, Wine Spectator. “As wine becomes more important to diners, the Awards program is thriving—with an increasing number of entries, as well as growing print, digital and social audiences. Wine Spectator congratulates each and every award winner.”

Wine Spectator began its program to recognize the world’s best wine lists in 1981. There are three levels: the Award of Excellence, the Best of Award of Excellence and the Grand Award—with 2,335; 1,168; and 89 winners this year in each respective category. The Award of Excellence recognizes restaurants whose wine lists feature a well-chosen assortment of quality producers along with a thematic match to the menu in both price and style. Best of Award of Excellence recipients offer more extensive selections with significant vintage depth and excellent breadth across multiple regions. The Grand Award is the program’s highest honor. The complete list of award winners is available in print in Wine Spectator’s August issue, currently on newsstands and online at Restaurants.WineSpectator.com, where visitors can search and access exclusive content on the more than 3,500 restaurants. The full list is also available for free on iOS via the Restaurant Awards app, which allows users to look for dining spots in any location with maps, choosing by wine strengths, cuisine type, pricing and more. Follow the Restaurant Awards on Twitter and Instagram, with hashtag #WSRestaurantAward.

About Michael’s On East Michael’s On East was founded on April 27, 1987. Located at 1212 East Avenue South in Midtown Plaza, the iconic restaurant is open for lunch 11:30 a.m. to 2 p.m. Monday through Friday, open for dinner 6 p.m. to close Monday through Thursday and 5:30 p.m. to close on Friday and Saturday. The restaurant is closed on Sundays, with the exception of Easter and Mother’s Day each year. The establishment is the winner of the 2009 Fine Dining Hall of Fame and received their 28th consecutive AAA Four-Diamond Award as well as the Wine Spectator’s Best of Award of Excellence in 2017. Michael’s On East is a contemporary fine dining restaurant featuring an extraordinary supper club atmosphere, inspired cuisine and an intimate piano bar. Michael’s Events & Catering is Sarasota’s premiere caterer creating memorable events from candlelit dinners for two to dazzling galas for 1,000. Michael’s Wine Cellar hosts more than 1,000 International estate-bottled wines including more than 200 domaine wines under $20, boutique spirits and craft beers. Michael’s Wine Cellar is open Monday through Saturday, 10 a.m. to 6 p.m. For more information, call 941-366-0007 or visit www.bestfood.com.